With immediate effect, “Verlagsgruppe Deutscher Fachverlag” will be presenting itself with its new name “dfv Mediengruppe”, i.e. “dfv media group”, or “dfv” for short. At the same time, dfv is introducing its modernised brand identity encompassing a new logo, a new claim and optimised corporate design.

“dfv has evolved into a widely diversified, cross-media provider of specialist media. In the last few years, we have vastly expanded our range of products, especially in the digital segment and event area. New subsidiaries and shareholdings supplement our portfolio. We are consolidating all of that with our new brand strategy. By doing so we are simultaneously investing in our company’s future: A strong brand is important for success in the sales, employment and opinion market. It is an emotional orientation point and creates scope for identification; it achieves distinctiveness and supports a positive image transfer between the options we offer,” says Klaus Kottmeier, dfv Supervisory Board Chairman.

The new name “dfv Mediengruppe”, i.e. “dfv media group”, is an umbrella encompassing the entire portfolio – whether print, digital, events or services. It does justice to the current size and versatility of the company and opens up scope for further growth. The logo with the dynamic “dfv accent” is also new. Red – an attention-grabbing signal colour – has been used for the accent symbol, that expresses what the media group does: It places important accents with the aid of its publications and platforms – in the industries for which it provides accompanying journalistic support and for the individual professional path of its readers. The offers of the “dfv media group” are relevant and fundamental; they make market development transparent; they bring people together and interlink entire industries.

“Making people more successful in their occupations and business – that is what dfv regards as its central function. People who read our media, attend our events and use the products we offer have a compass for their own success ready to hand. We provide the tools that enable our readers and customers to shape their future,” says Brita Westerholz, who is responsible for the new branding as Head of dfv Corporate Marketing and Corporate Communication. The new claim – “Know more, decide right” – puts it in a nutshell.”

With the new corporate design, the “dfv media group” presents itself – inwardly and outwardly –
as powerful, human and clear: it reflects the self-assurance of a company that is one of Europe’s leading specialist media companies. Furthermore, it conveys the personal and obliging culture of dfv visually, employing a visual and written language that is simple, understandable and comprehensible.

The new presentation was developed together with the prestigious agency MetaDesign. Group-wide implementation – including in the appearance of the media brands, subsidiaries and majority shareholdings – commenced at the beginning of January 2014. The revised website, www.dfv.de, is already online. The company name of the parent company under commercial law will still be “Deutscher Fachverlag GmbH”. 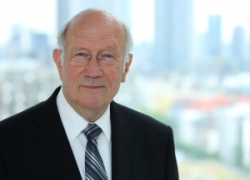 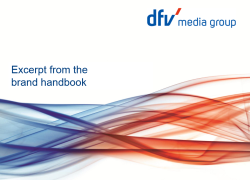 Excerpt from the
brand handbook

of the dfv media group
PDF file for download