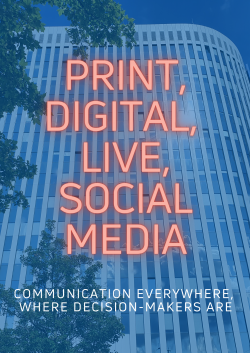 Print, digital, live and social media - the dfv media group provides relevant and reliable specialist information for decision-makers across all channels. It stands for the highest quality and independence in B2B communication and networks entire sectors of the economy with its offerings. In this way, it paves the way for professional success - because knowledge moves us a step forward.

Quality pays off: No other media company has more titles in the annual ranking of Germany's 150 trade magazines with the highest advertising sales than the dfv media group – the top 5 include Lebensmittel Zeitung in first place, followed by TextilWirtschaft, and HORIZONT in 4th place. Ten publishers account for two-thirds of the top 150 advertising sales. At 18 percent, the largest share ends up with the dfv media group (source: HORIZONT No. 20-21/2022, based on publisher data).